Xultophy 100/3.6 - Type 2 diabetes medication - Benefits, Side Effects and How to Use It 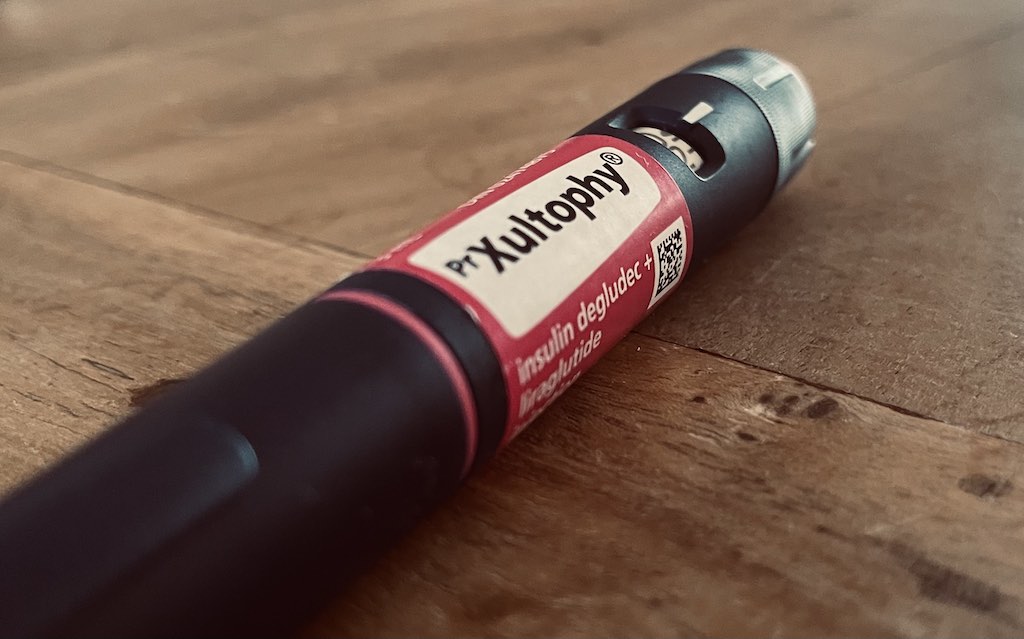 Xultophy is a combination of 2 manufactured naturally occurring chemicals, insulin and glucagon like peptide-1 (GLP-1). It is used in the treatment of type 2 diabetes. Based on extensive studies it is probably the most powerful treatment for type 2 diabetes currently available - particularly when used appropriately.

Each ml of Xultophy contains 100 units of insulin degludec and 3.6mg of liraglutide.

Not only does Xultophy (IdegLira) lower blood sugars superbly, it does this whilst causing very low level rates of hypoglycaemia (low blood sugars) and often leads to modest weight loss.

How Effective is Xultophy (IdegLira)?

Xultophy (IdegLira) is extremely effective at lowering blood glucose levels and has been extensively tested under the DUAL studies. To date there have been 10 large randomised studies involving thousands of participants using Xultophy (IdegLira) in many different situations.

Xultophy is made up of a fixed combination of long acting insulin degludec (sold as Tresiba) as well as the GLP-1 agonist liraglutide (sold as Victoza). The term fixed combination is used as both drugs are mixed together in a single pen and for any given dose, the ratio of each drug is the same.

Does Xultophy (IdegLira) cause Weight Loss?

Mostly... yes it does, although the weight loss is modest. The reason that weight loss occurs is due to the liraglutide component of Xultophy. Often it depends on the medication a person was taking prior starting Xultophy and the treatment we are comparing it with.

If a person is switched from insulin, weight loss is likely. Compared to starting a person on insulin the weight difference is typically about 3kg or 7lbs lower with Xultophy.

In studies where a person was switched from a GLP-1 like Byetta or Victoza then there was a small amount of weight gain seen.

Are There any Other Advantages to Using Xultophy (IdegLira)?

Xultophy leads to very significant falls in bloods sugars and a modest reduction in weight. The presence of liraglutide (Victoza) also has a number of other advantages including:

What is the Dose of Xultophy (IdegLira)?

The dose of Xultophy (IdegLira) varies from person to person and depends on their glucose level.

In all the trials the dose administered each day was increased based on a simple titration table with the aim of achieving a fasting morning blood sugar of 72-90mg/dl or 4-5mmol/l.

Every 3 days the blood sugar should be checked and if above 90mg/dl (5mmol/l) then the dose in increased by 2 dose steps (clicks on the pen). This process is repeated until the fasting blood sugar is at target.

If the blood sugar is too low in the morning (less than 72mg/dl or 4mmol/l) then a 2 dose step reduction needs to be made.

How often is Xultophy (IdegLira) given?

Xultophy (IdegLira) is administered once per day. It should be given at a similar time that is convenient to the person taking it. You do NOT need to take it with food.

If a person is nauseated it can be taken before bed.

What is the maximum dose of Xultophy (IdegLira)?

The maximum dose of Xultophy (IdegLira) is 50 dose steps which equates to 50 units of insulin and 1.8mg of liraglutide. Despite this maximum dose, a small number of people may continue to have higher blood sugars that are above target and there is much debate about whether higher doses could be used.

There is no scientific evidence to provide guidance but as a general principle, if a person is on a maximum dose of 50 dose steps and the morning fasting sugar is high, then more insulin is needed. If the fasting sugar level is at target then a different strategy needs to considered.


What are the Common Side Effects of Xultophy (IdegLira)?

Xultophy has been extensively tested and consistently has been shown to be very well tolerated with few, if any side effects. The main side effects are nausea and abdominal symptoms (bloating, reflux, constipation or diarrhoea) and these occur in about 2-3% of people using the drug. The side effects tend to be mild and settle.

Xultophy does contain insulin and therefore there is a risk of low blood sugar levels (hypoglycaemia) however, the rates of hypoglycaemia with Xultophy are much lower than in people using just insulin. For example Xultophy compared to Lantus (insulin glargine) and multiple injections of rapid acting insulin had 90% fewer hypoglycaemic episodes.

What are the rare side effects of Xultophy (IdegLira)?

While Xultophy is well tolerated there are a few side effects that can occur. These same issues are only rarely seen with liraglutide (Victoza) and insulin usage. Examples include:

How do you Store Xultophy (IdegLira) and does it Need to be Refrigerated?

Yes. If you have excess Xultophy (IdegLira) injectable pens at home, they need to be stored in the fridge.

The best place to store your Xultophy (IdegLira) pens in the fridge, is on the top shelf of the fridge door. The butter compartment is usually the safest place. You shouldn’t store your Xultophy pens in the coldest part of your fridge. If the Xultophy injectable pens becomes too cold, then the drugs may degrade, making them less effective, leading to higher blood glucose levels.

If I am on insulin is it worth Switching to Xultophy?

The answer is almost certainly yes. There have been a number of studies that have compared people already using insulin AND high sugars compared to Xultophy (IdegLira) such as the Dual V and Dual VII studies. In both of these large randomised trials the blood sugar lowering effect was outstanding with Xultophy (IdegLira) with much lower rates of hypoglycaemia and weight loss.

We don't know what the safety and effectiveness of changing people on high doses of insulin to Xultophy as the trials only included people on up to 50 units of Lantus (insulin glargine).

If I am on a GLP-1 like Victoza, Byetta or Bydureon is it worth switching to Xultophy?

Yes it is. Despite GLP-1s drugs being very effective - typically 60% of people will have an Hb A1c below 7% using these drugs - there are some people who continue to have higher and less safe sugars levels.

This raised the question... Is it better to stop drugs like Victoza, Byetta and Bydureon if the sugars remain high or can the combination of insulin degludec and liraglutide in Xultophy still work?

The author of this article published the Dual III study which found that despite selecting people who did not respond adequately to a GLP-1, the combination was highly effective with over 7% of people achieving an Hb A1c below 7%.