Insulin pumps are able to act like a pancreas. Let's talk about low glucose suspend. 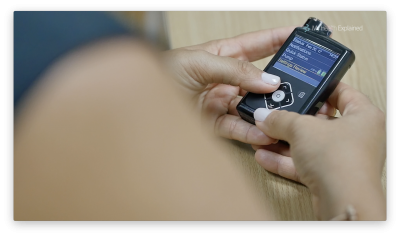 Do you struggle with low blood sugars (hypos) or fear them occurring? Perhaps you try to keep your sugar levels at a higher level to avoid having a hypo?  A new feature in insulin pump technology may be able to help....

Before going into the details, it is worth just quickly going over 2 important pieces of technology available for people with type 1 diabetes that are quickly becoming main stream.

The first is Insulin pumps.  These devices are made by several different manufactures but all essentially do the same thing, delivering insulin using mechanical devices which administer insulin every few minutes based on prespecified rates. This has the advantage of allowing different amounts of insulin to be delivered at different times of the day or night depending on the dose of insulin estimated to be required. Whilst it may sound like this clever technology can decide the amount of insulin you need, it can’t. It still needs lots of work to get the best results.

Although this is about to change but more on that in a moment…...

The other technological development is Continuous Glucose Monitoring or CGM. I think this new tool to help manage diabetes is incredible and will change diabetes profoundly over the next few years. CGM involves 3 parts, a sensor (to measure your glucose level), a transmitter (to send the glucose result to another device which is often the third piece of the puzzle, a receiver). The receivers can be an insulin pump, a mobile phone or a dedicated unit.

The sensor is comprised of a wire that is easily placed under the skin and will literally “taste” glucose levels in the liquid that surrounds the fat cells that are under the skin in the subcutaneous space (the place where insulin is injected into). It is not measuring blood glucose but rather extracellular fluid glucose levels. There may be at time discrepancies between the blood and tissue glucose but nonetheless it is a good guide.

Continuous glucose monitoring (CGM) used with an insulin pump can alert a user to fluctuations in blood glucose levels with alarms and visual displays on the pump itself. With advances in technology this has been adapted to include algorithms which will suspend the delivery of insulin if the sensor glucose level is reading low- this feature developed by Medtronic is referred to as 'low glucose suspend'.

These low limits can be varied to include different values during the day or night... very clever ...For example, you may want a higher low threshold during the night when asleep than the daytime when you can treat the hypo if it happens.

Medtronic, who originally developed low glucose suspend, have recently released a new pump to the market, the 640G MiniMed and together with their Enlite sensor have taken this technology further and rather than suspend insulin once the blood sugar is low, instead the pump will now anticipate that the glucose level will go low in the future and will suspend the delivery of insulin before this occurs.

Medtronic call this technology 'Smartguard' and is the first of many insulin pumps/sensor systems that will deliver a true artificial pancreas-like technology over the next few years. This pump has significantly changed the way many people are living with diabetes. The next version, called the 670G will be released in mid 2017 and will also have the ability to deliver more insulin if the glucose levels are high, adding the potential of augmenting glucose levels at both the high and low end of the range.

How does it work if I’m asleep or unconscious?

Alerts and alarms are set on the pump and can differ during day or night as you may not want to be woken during the night if suspending before a low occurs. However, if you reach your low limit you will always receive a message and alarm and if no response has been made within 10 minutes, a siren will sound with an emergency message appearing on the pump to call for medical assistance.

Once suspended, the pump will automatically resume insulin delivery after 30 minutes once the sensor detects that the glucose level has improved and trending upwards.

Not entirely... Trials and analysis of pump downloads suggest that when the ‘Smartguard’ feature is turned on and a sensor is in use, hypoglycaemic episodes can be reduced by about 80% without causing high blood glucose levels. As the accuracy of CGM improves this may lead to further reductions in hypos rates.

To The Point: What are the benefits of 'Low Glucose Suspend'?